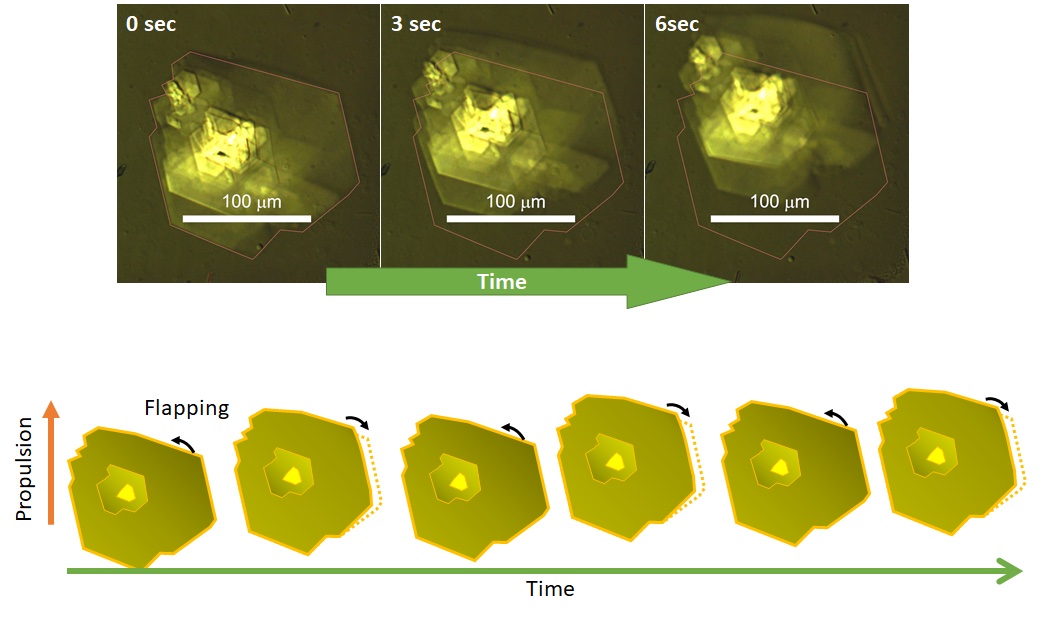 Synthesized microrobots that are capable of converting their mechanical motion into a means of self-propulsion in water have been developed by scientists at Hokkaido University.

Synthesized microrobots propel themselves in a two-dimensional tank (CC BY 4.0 Yoshiyuki Kageyama)

Creating molecular microrobots that mimic the abilities of living organisms is a dream of nanotechnology, as illustrated by the renowned physicist Richard Feynman. There are a number of challenges in achieving this goal. One of the most significant of these is the creation of directed self-propulsion in water.

A team of three scientists from Hokkaido University, led by Assistant Professor Yoshiyuki Kageyama, has succeeded in creating a microcrystal that utilizes self-continuous reciprocating motion for propulsion. Their findings were published in the journal Small.

The dream of microrobots is an old one, having been addressed in science fiction for many decades, and popularised by the rise of nanotechnology. One aspect of these robots is self-propulsion, the ability to move themselves self-sustainably. There are two major challenges to achieving this: the first is to make a molecular robot that can reciprocally deform, and the second is converting this deformation into propulsion of the molecular robot.

Kageyama’s group built on their previous research that had solved the first challenge — the creation of molecular robots that can reciprocally deform. However, tiny objects cannot convert their reciprocal motion into progressive motion, in general, as explained by Edward Purcell’s scallop theorem. In the current study, the scientists went to the next step and succeeded in realizing self-propulsion of the molecular robot in an experimental system where motion was confined to two dimensions; in this system, viscous resistance acts anisotropically, making it negligibly weak.

The microrobot was powered by blue light, which drove a series of reactions leading to the fin flipping and the propulsion. Due to the nature of the reactions, the motion was not continuous, but occurred intermittently; in addition, the molecular robots exhibited one of three different styles of propulsion: a “stroke” style, with the fin in front; a “kick” style, with the fin behind; or a “side-stroke” style, with the fin to one side. The nature of mobility was affected by the area of the fin and its angle of elevation; individual crystals propelled themselves in different directions and styles.

The scientists then created a computational minimum model to understand the variables that affected the propulsion in a two-dimensional tank. They were able to determine that fin length, fin ratio and elevation angle were the key variables affecting the direction and the pace of propulsions.

“The result, which demonstrated that tiny flappers can swim assisted by the anisotropy caused by confined spaces, could spur research into molecular robots” says Kageyama. “A similar mechanism may be in the movement of small aquatic organisms in specific conditions such as inside eggs.”

Funding:
This research was supported by the Japan Society for the Promotion of Science (JSPS) KAKENHI in Scientific Research on Innovative Areas “Molecular Engine” (JP18H05423) and in Scientific Research on Innovative Areas “Discrete Geometric Analysis for Materials Design” (JP20H04622); and by the Ministry of Education, Culture, Sports, Science and Technology (MEXT) through the Program for Leading Graduate Schools (Hokkaido University “Ambitious Leader’s Program”).