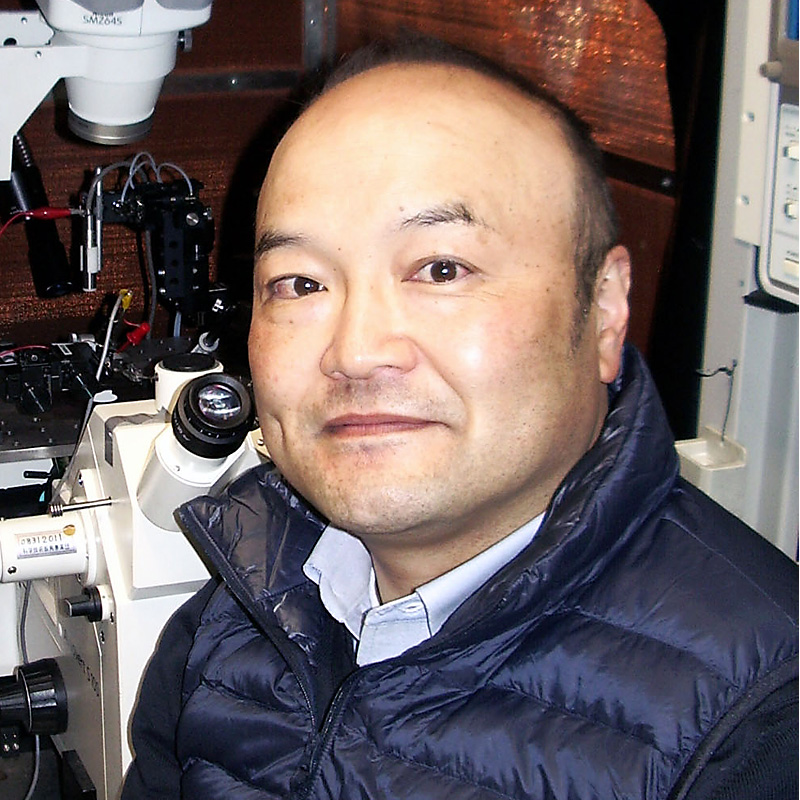 Animals perceive the external environment based on sensory input and make decisions of behavior by using their central nervous system. Except for a very simple reflex movement, there are rarely studies that completely elucidate the neural mechanism from receiving stimulus to final motor outputs via neural information processing in a certain behavior. In our laboratory, we aim to completely understand the whole neural circuit and its information processing computation "from inputs to outputs", using the wind-elicited escape behavior and sound source localization behavior (phonotaxis) in the crickets as a model system<See Photo "Field crickets">.
Electrophysiology and optical imaging technique are mainly used for our research methods. In particular, imaging is a very powerful tool for visualizing the local activity in single neuron and analyzing the spatiotemporal pattern of population activity in the brain. <See Photo "Optical recording apparatus">. In addition to these two methods, we manipulate the environment artificially with virtual reality (VR), and simultaneously measure animal’s locomotion with a treadmill or high-speed camera <See the photo "Treadmill system"> to clarify the information processing and neural computation of the nerve system. We are also working on decoding analysis of neural activity by machine learning.
Crickets have mechanosensory organs called cerci at the abdomen, and the sensory inputs from the mechanosensory hairs detecting the air current is sent to wind-sensitive interneurons including identified giant interneurons (GIs) in the terminal abdominal ganglion <See Photo "Wind-sensitive giant interneurons and mechanosensory afferent". GIs extract information on airflow dynamics such as direction and frequency from mechanosensory afferents and conver them to higher center including brain. We have clarified the direction selectivity of GIs (See Photo "Direction selectivity of the GIs") and the synaptic integration process to forms their response properties <See Photo "Dendrictic calcium response in GIs". In addition, we are also working on the neural mechanism underlying the auditory modulation of the wind-elicited escape behaviors and exploring the neural substrate of decision making of action selection either running or jumping for the escape.
The female cricket exhibits sound source localization behavior, "phonotaxis", to approach the male’s calling song. This behavior has been studied for a long time as a classical theme of neuroethological studies, but it is still enveloped in a mystery how the direction of the calling song is represented and how the walking locomotion is controlled based on the direction information of the sound source. We quantitatively analyzed the phonotaxis behavior on the experimental arena in the soundproof room <See Photo "Experimental arena">, and revealed that the phonotaxis consisted of multiple behavioral phases. We are trying to clarify the neural mechanisms encoding the sound source orientation and executing goal-directed locomotion by physiological recording the brain activity of crickets during the phonotaxis toward the calling song under the auditory VR environment on the treadmill. 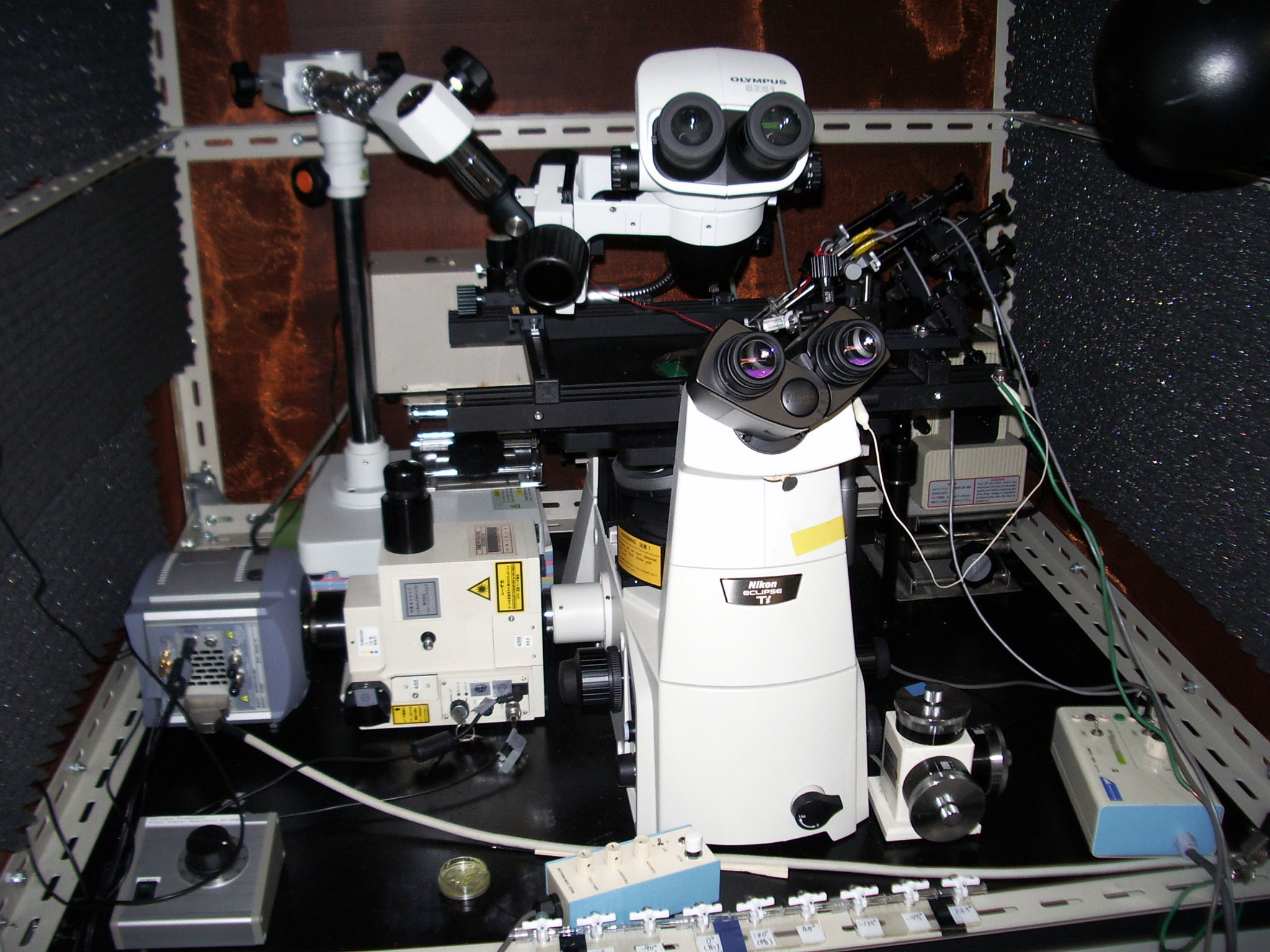 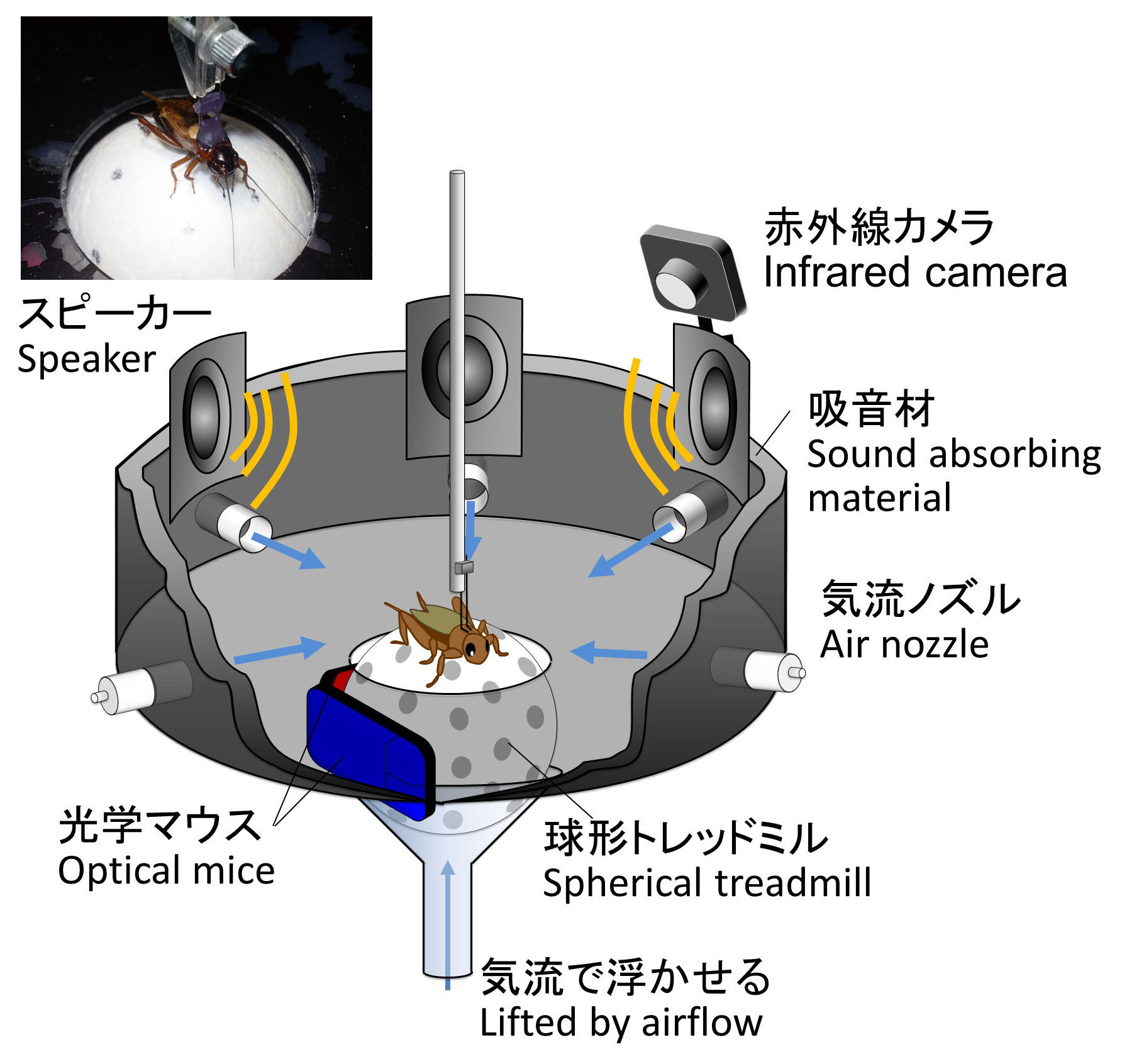 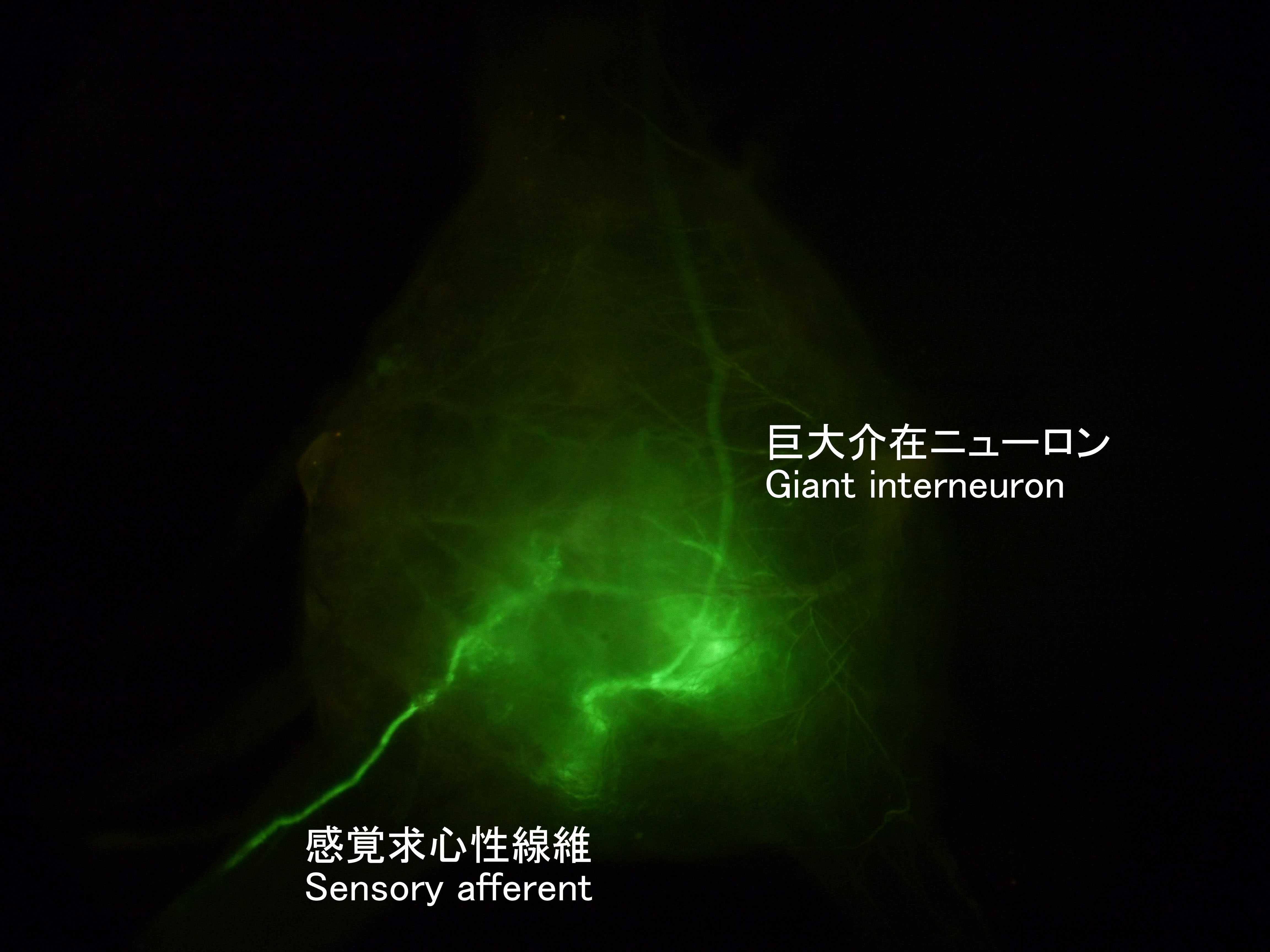 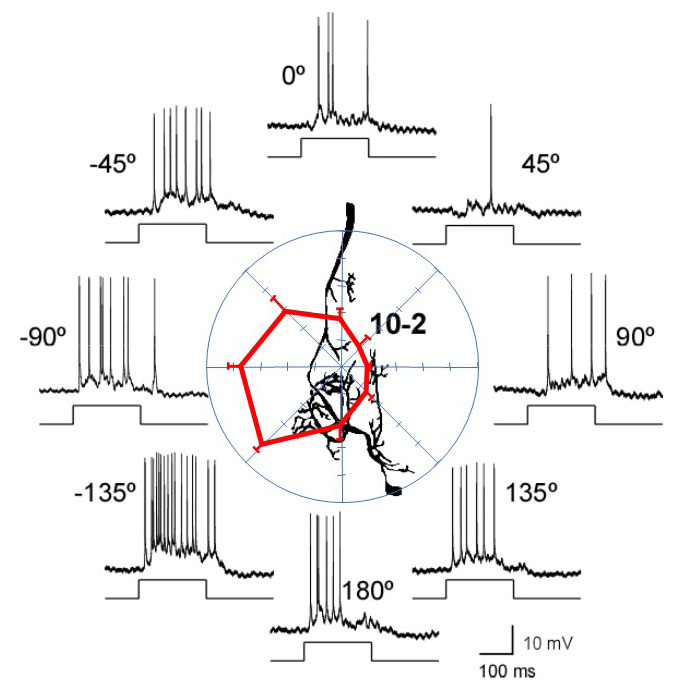 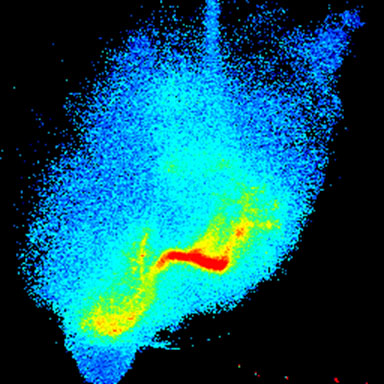 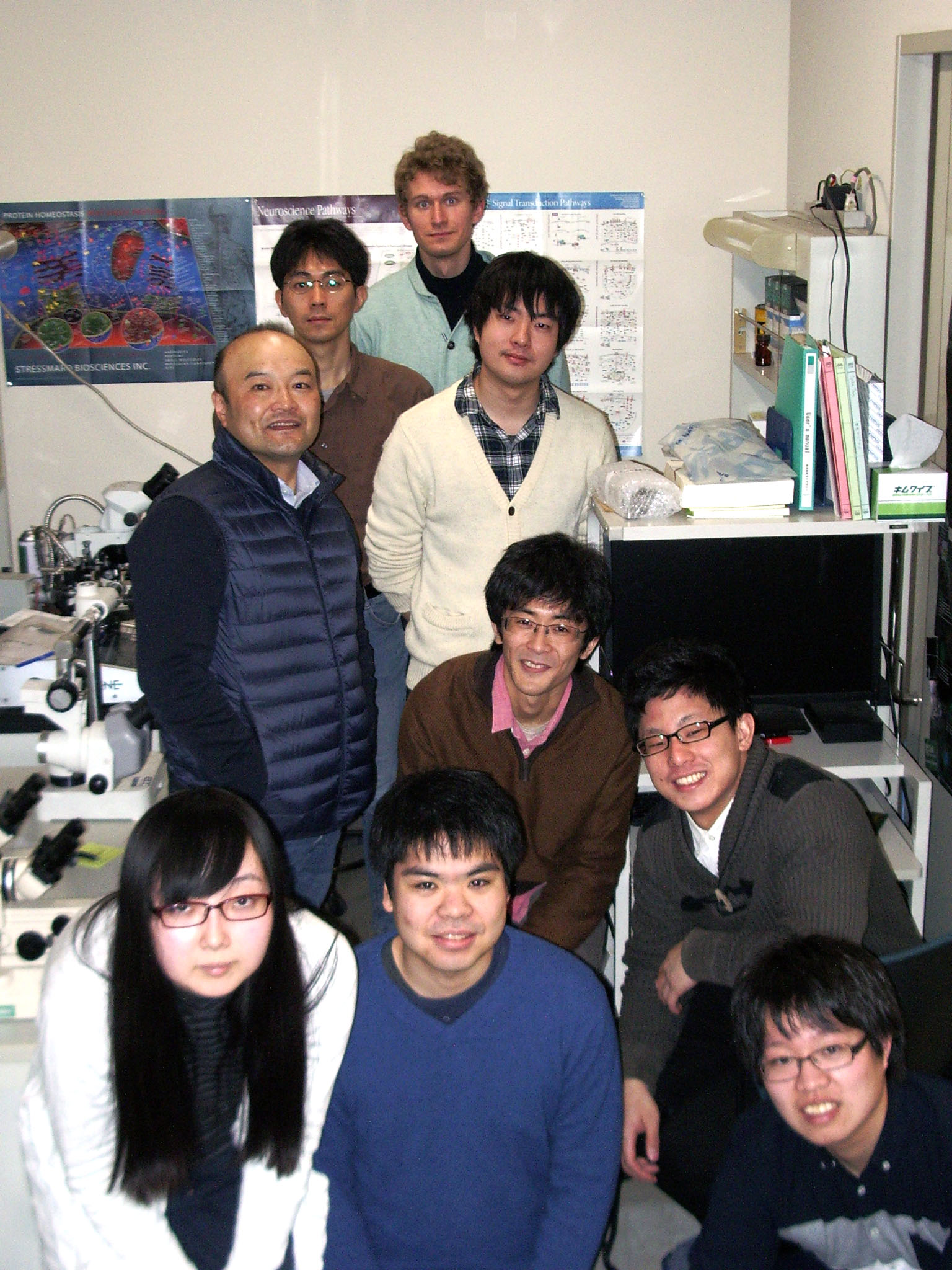