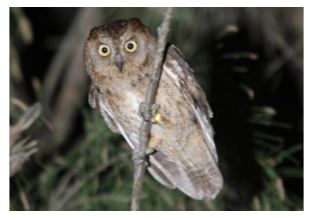 Abstract
Top predators are frequently the target of conservation programs. Owls are such predators. However, previous studies of owls are biased to species occurring in temperate regions, whereas most owl species occur in tropical or subtropical regions and are understudied. Furthermore, owls are often endemic to islands and of unknown conservation status. Demographic data for such species are especially scarce although they are essential for initiating and promoting their conservation. As a case study of demographic analysis of owls in a tropical or subtropical area and on islands, we applied an integrated population model to 7‐year monitoring data (2012–2018) of the Ryukyu Scops Owl population on Minami‐daito Island, Japan. We used survival history data from…..