A new tool to create chemical complexity from fatty acids 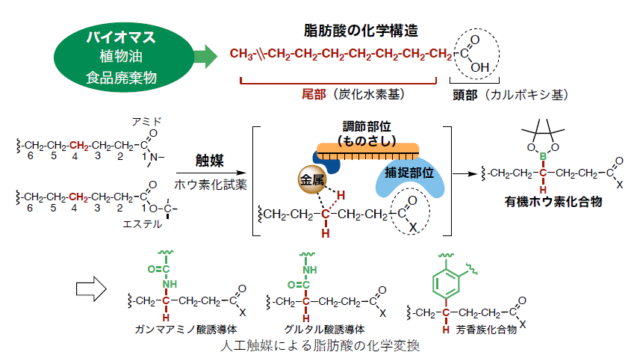 A new catalyst design enables unprecedented control over the modification of fatty acid derivatives that opens the door to creating useful substances in a green and efficient manner.

Hokkaido University WPI-ICReDD researchers developed a modular catalyst that can accurately modify fatty acid derivatives in a hitherto inaccessible position. This enables the efficient production of valuable compounds from a renewable bioresource, whereas before we had to either rely on petroleum-derived resources or use complicated and costly methods.

The newly developed catalyst consists of an iridium-based catalytic center and various modules that control the position of the substrate, leading to the desired reaction. (Reyes R. L. et al., Science, August 21, 2020)

Many pharmaceuticals and plastics consist of a backbone that is essentially a chain of carbon atoms with modifications within their hydrocarbon framework. For their production, fatty acids are attractive raw material because they are easily accessible, renewable natural resources that consist of a chain of carbon atoms attached to a functional group called “carboxyl group.” However, our ability to modify these chains has so far been limited to carbon atoms only one or two atoms away from the carboxyl group. Professor Masaya Sawamura of Hokkaido University’s Institute for Chemical Reaction Design and Discovery (WPI-ICReDD) explains, “The chemical materials obtained in this way are limited to those with fairly simple structures, and in order to synthesize useful compounds, multi-step processes are necessary.”

Building upon previous studies, Sawamura’s group constructed a catalyst that consists of an iridium atom at its core and various modules that ensure that a fatty acid derivative — fatty acid amide or ester in this case — is precisely positioned in such a way that the C–H bond located three carbons away from the carboxyl group is modified. Moreover, while every C–H bond in a fatty acid derivative can be modified in two ways,  giving compounds that are mirror images of one another, the catalyst developed by the team produces only one of the two possible products, which is an important attribute especially for drug development. To increase the breadth of possible modifications further, the researchers try to use different modules in their catalyst to change the way the substrate is positioned in the catalyst to allow different modifications.

In their article published in Science, the team demonstrated that their approach works with various substrates and can produce a large range of useful derivatives. In addition, they used quantum chemical calculations to investigate the precise structure and function of their catalyst driving the observed reactivity and selectivity. The results confirmed that the catalyst has a deep pocket that binds the substrate through interactions between one of its subunits and the carbonyl group of the substrate, and keeps it in place to facilitate the specific reaction — a feature analogous to natural enzymes.

“The modular catalyst allowed the site-selective modification of fatty acid amides and esters, some of which are bioactive compounds. This simple, modular, and broadly applicable catalytic system allows the introduction of structural and chemical complexity to the hydrocarbon chain of readily available feedstock chemicals,” says Ronald Reyes of the research team. Central to the success of these endeavors is a combination of experiments and computation. Sawamura says, “The accumulation of experimental knowledge is a source of great inspiration, but with the support of computer chemistry we can bring this to fruition in the near future.”

Video summarizing the study (Provided by the research team)